In previous posts, I talked about the story itself and touched on some of the older film versions of the story. Today I’ll round out the media overview with a few of the newer versions.

First off is the 1984 television movie with George C. Scott. One of the things that makes this version interesting is that Scott doesn’t play Scrooge as the worst miser in the world, but rather as a hard-nosed businessman. You can believe this Scrooge is no worse than a hundred other people for whom the bottom line is paramount. It makes for a different, but believable interpretation. The other thing that makes this stand out for me, is that it’s a virtual who’s who of British actors of the time. Cratchit is played by David Warner, who has been in a plethora of shows and movies. Edward Woodward plays the Ghost of Christmas Past, who takes no guff from Scrooge. Susanna York is Mrs. Cratchit, Roger Rees is Fred, Joanne Walley is Fan, and Mark Strickson who would go on to be Turlough in Doctor Who is young Ebenezer. 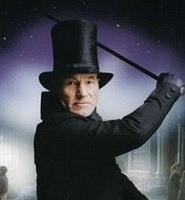 In 1999 Patrick Stewart took on the iconic role. He had been touring the year before, doing a reading of the story on stage, so knew it very well. You can see that in some of the little touches that appear if you know to look for them. His is another fairly laid back interpretation, though he is harder than Scott’s Scrooge. Stewart is for me one of the few actors who are believable both as the earlier miser and the redeemed man. Also in this version are Joel Grey as the Ghost of Christmas Past and Richard E. Grant as Cratchit. Interestingly, it also has Ian McNeice as Fezziwig, and Saskia Reeves as Mrs Cratchit. The two would be together again the next year in Dune playing very different roles.

The 2004 musical version was a television remake of the Broadway play. It starred Kelsey Grammer, who played Scrooge as an angry old man. The play had been rather tongue in cheek, with a lot of humor, some of which bleeds through to this. The plot is a bit thin, as in most musicals, but it’s quite a delightful retelling for all that. Jason Alexander plays Marley, which shouldn’t work, but does somehow, and so does Geraldine Chaplin as the Ghost of Christmas Yet to Come. What I like most about this story is the relationship between Scrooge and Marley. They are depicted as friends, not just business partners. It is also filled with tunes which can get into your head and play over and over again.

Obviously, I haven’t touched all the versions. I’m particularly ignoring the Disney version of 2009. It was when 3-D movies were new, and in my opinion, goes out of its way to showcase that at the expense of the story. Jim Carrey is good, though. Nor have I touched A Muppet Christmas Carol, which is a love it or hate it movie. Personally, I love Michael Caine as Scrooge and enjoy the retelling, even with the silliness. And there’s An American Christmas Carol, with Henry Winkler, set in New England during the Depression. What I like most about this is that when Winkler’s character is redeemed, he is still his gruff self, and doesn’t go all sappy

I did want to mention a few of the audio versions. Jim Dale who narrated the American recordings of the Harry Potter books does an unabridged version which is very good. You can find a lovely rendition online of Neil Gaiman, dressed as Dickens, reading from the actual script that Dickens used when he toured doing his readings on stage. There is an abridged version done by Patrick Stewart from the touring that he did. The most amazing thing about this one is him as Tiny Tim, singing. It has to be heard to be believed. And finally, I have an abridged recording by Tom Baker who was Doctor Who. Not the best version in the world, but he’s always a delight to listen to.

Find more than 9000 inspirational quotes and a link to the Quote of the Day list, as well as quotation related merchandise, at http://www.quotelady.com. Also visit us on Facebook at https://www.facebook.com/pages/Quote-Lady/133258553807 and on Twitter: https://twitter.com/kloberst (@kloberst)