February 9 is National Bagel Day (also known as Bagel and Lox Day). We think the bagel was invented in Poland. What we do know for sure is that by the mid-seventeenth century the bagel had become a staple of the Polish diet in particular, and the Slavic diet in general. By the mid-nineteenth century, bagels were for sale in London, where they were displayed in the windows of bakeries on vertical wooden dowels, up to a meter in length, on racks. People think bagels came to the United States with Jewish immigrants from Poland. They were widely available in New York City for a long time but didn’t really become popular in the rest of the country until the last 25 years of the twentieth century.

Bagels now come in a wide variety of flavors, but they all have one thing in common – they are boiled, often with malt powder, before they are baked. Recently, some have taken to steaming them instead of boiling, but true bagel aficionados do not consider them the same at all. According to the National Bagel Day website, there are two kinds of bagels: “the Montreal and New York styles. The Montreal style has malt and sugar and no salt. It’s boiled in honey-sweetened water and then baked in a wood-fired oven. The New York style has salt and malt and is boiled in water before being baked in a standard oven. The New York bagel is puffier and has a smaller hole than its Montreal counterpart. Montreal bagels are sweeter and less dense. They’re also crispy on the outside and chewy on the inside.”

So have a bagel to celebrate today! My current favorite is a pumpernickel bagel with garlic cream cheese from my local bagel shop. By the way, it is also National Pizza Day, and to celebrate, Thomas’ is offering a limited option of pizza flavored bagels. You might want to get to a grocery store and check them out! 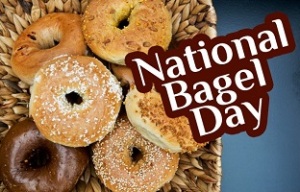 The first printed mention of bagels…is to be found in the Community Regulations of Kracow, Poland, for the year 1610 which stated that bagels would be given as a gift to any woman in childbirth.–Leo Rosten

The bagel is a lonely roll to eat all by yourself because in order for the true taste to come out you need your family. One to cut the bagels, one to toast them, one to put on the cream cheese and the lox, one to put them on the table and one to supervise.–Gertrude Berg

I’ve said this before, and I say it again. Bagels can be an enormous power for good or for evil. It is up to us to decide how we will use them.–Daniel Pinkwater

I served seven years as the chair of the Princeton economics department where I had responsibility for major policy decisions, such as whether to serve bagels or doughnuts at the department coffee hour.–Ben Bernanke

According to a new poll, Republicans are more likely to have a doughnut for breakfast, while Democrats prefer to eat bagels and croissants. While Independents are that annoying friend who’s still looking at the menu after 15 minutes.–Jimmy Fallon

I definitely invented the everything bagel. There’s no doubt. It’s undeniable truth. It’s one of those things that’s 100% true, 50% of the time.–Joe Bastianich

In New York, I like it when you can get bagels at 3 in the morning.–Shepard Smith

Bagel in the morning is the ultimate breakfast for me; they’re just good.–Lee DeWyze

Romanians have a saying, ‘Not every dog has a bagel on its tail.’ It means that not all streets are paved with gold.–Nadia Comaneci

Find nearly 9500 inspirational quotes and a link to the Quote of the Day list, as well as quotation related merchandise, at http://www.quotelady.com. Also visit us on Facebook at https://www.facebook.com/pages/Quote-Lady/133258553807 and on Twitter: https://twitter.com/kloberst (@kloberst)