In Xanadu did Kubla Khan
A stately pleasure dome decree:
Where Alph, the sacred river, ran
Through caverns measureless to man
Down to a sunless sea.

Those words, which begin the poem “Kubla Khan” by Samuel Coleridge Taylor, have always fascinated me. Since September 23 is Kublai Khan’s birthday, I decided to write about him today.

The grandson of Genghis Khan, Kublai Khan was born in Mongolia in 1215. He was a general and an administrator when his brother died in 1260 when he named himself Great Khan and took control of the empire, which at this time stretched from the Caspian Sea east to the Pacific Ocean. After a civil war with another brother, Kublai eventually emerged victorious in 1264. Ariq Böke surrendered in Shangdu (also known as Xanadu) to Kublai. Kublai moved the capital to near modern-day Beijing, where he was a mainly benevolent ruler, setting up an administrative structure in keeping with local customs, improving infrastructure, implementing religious tolerance and introducing paper money for economic transactions.

Always fascinated by Chinese culture, in 1267 he set out to fulfill the dream of his grandfather and unite China, by subduing the Song Dynasty in southern China. It was a long campaign and involved learning new kinds of warfare, but by 1279, all China was under his control. However, this caused problems, since if he acted like a barbarian foreign conqueror, the Chinese would reject him, but the more he set things up on the Chinese model, the more he alienated his Mongol base. Consequently, the Yuan dynasty that he set up did not long survive his death in 1294. By 1368, they had gone back to Mongolia, but their legacy of a united China remained.

If the stories of Marco Polo are true, he met the Great Khan on his travels. 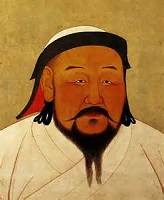 There don’t seem to be quotes by Kublai Khan, so here are some from his grandfather Genghis. I think they were much of a kind.

If you had not committed great sins, God would not have sent a punishment like me upon you

The strength of a wall is neither greater nor less than the courage of the men who defend it.

Not even a mighty warrior can break a frail arrow when it is multiplied and supported by its fellows. As long as you brothers support one another and render assistance to one another, your enemies can never gain the victory over you. But if you fall away from each other your enemy can break you like frail arrows, one at a time.

An action committed in anger is an action doomed to failure.

I hate luxury. I exercise moderation… It will be easy to forget your vision and purpose one you have fine clothes, fast horses and beautiful women. [In which case], you will be no better than a slave, and you will surely lose everything.

A leader can never be happy until his people are happy.

Conquering the world on horseback is easy; it is dismounting and governing that is hard.

There is no good in anything until it is finished.

Even when a friend does something you do not like, he continues to be your friend.

One of the joys of travel is visiting new towns and meeting new people.

Heaven grew weary of the excessive pride and luxury of China… I am from the Barbaric North. I wear the same clothing and eat the same food as the cowherds and horse-herders. We make the same sacrifices and we share … our riches. I look upon the nation as a new-born child and I care for my soldiers as though they were my brother.