July 21 is the day to invite an alien to live with you. In this case, we aren’t talking about someone from a foreign land, although that would be a kind thing to do. This day, however, commemorates Mork from Ork, that is, Robin William’s character of that name. We celebrate this odd holiday today because Robin William’s was born on July 21. I enjoyed Mork and Mindy, but there are other fandoms celebrating this day as well, as, for instance, Doctor Who fans saying, “Doctor, you can come and live with me anytime!”

There have been shows and movies about aliens among us for a long time. For scary aliens, the fifties are a treasure trove. We have The Day the Earth Stood Still, The Thing from Another World, War of the Worlds, and Invasion of the Body Snatchers, which are all classics in their own way, and reflect the fear of the post war years. It was the more optimistic eighties that gave us Mork and Mindy, as well as such things as Starman, E. T. the Extra-Terrestrial, and Alien Nation, all of which show humans and aliens living together peacefully. Spanning those times, we have the Star Trek franchise, and Doctor Who, with wise and friendly aliens.

Robin Williams, who played Mork, was born in 1951, and sadly died in 2014. But he left us a legacy of so many amazing films. We remember his children’s movies – Aladdin, Jumanji, Happy Feet, and FernGully. We also remember his inspiring ones, like Dead Poets Society, Patch Adams, and What Dreams May Come, and the ones that defy easy description, such as The Fisher King, Awakenings, and the several Night at the Museum movies. Whatever part he played, his talent always shown brightly.

Today we salute Mork, and the one who brought him to life, the incomparable Robin Williams. 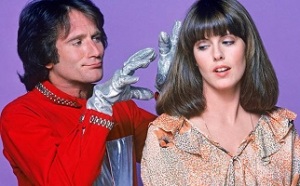 Quotes by Robin Williams. Many are from his movies.

You’re only given one little spark of madness. You mustn’t lose it.

What’s right is what’s left if you do everything else wrong.

No matter what people tell you, words and ideas can change this world.

Some are born great. Some achieve greatness. Some get it as a graduation gift.

[Mentor Jonathan Winters] taught me that the world is open for play, that everything and everybody is mockable in a wonderful way.

You have this idea that you’d better keep working otherwise people will forget. And that was dangerous. And then you realize, no, actually if you take a break people might be more interested in you.

If women ran the world we wouldn’t have wars, just intense negotiations every 28 days.

It’s a wonderful feeling when your father becomes not a god but a man to you – when he comes down from the mountain and you see he’s this man with weaknesses. And you love him as this whole being, not as a figurehead.aa

But only in their dreams can men be truly free. It was always thus and always thus will be.

Why do they call it rush hour when nothing moves?

Sometimes over things that I did, movies that didn’t turn out very well – you go, ‘Why did you do that?’ But in the end, I can’t regret them because I met amazing people. There was always something that was worth it.

Do I perform sometimes in a manic style? Yes. Am I manic all the time? No. Do I get sad? Oh yeah. Does it hit me hard? Oh yeah.

People say satire is dead. It’s not dead; it’s alive and living in the White House.