On May 26, we celebrate not just cheesecake, but a special version of the delicious treat – that with blueberries, either on top, or baked in, or both. It is said that blueberries are the most popular topping for cheesecakes. I tend to like mine without fruit, but for those of you who love your cheesecake this way, today is your day!

Cheesecake can be traced back to ancient Greece, but apparently, the sweetened kind we enjoy today is a fairly recent invention. Depending on where you live in the world, cheesecake (which is technically a tart, not a cake) is made with different bases. In the United States, cream cheese makes the cheesecake moist and creamy. In much of Europe, it is made with ricotta cheese, which tends to make them a bit drier and more solid, and in Germany and Poland, they are made with a kind of curd cheese, called quark cheese. The crusts can also vary widely, from graham cracker to crushed cookies to pastry. So there are lots of ways to experiment!

I have especially fond memories of cheesecake. Not only did my mother make a fabulous variety, but also my sister and brother-in-law had a wedding cake made out of cheesecake – the big tiered cake, and several smaller flavored ones.

Blueberries, of course, besides being delicious, are very healthy. Blueberries are one of the highest antioxidant foods in the world. According to a Web site called Dr. Axe, blueberries do all of the following:

So go ahead and enjoy that piece of cheesecake, knowing that at least some of it is healthy! 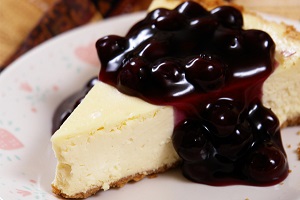 Because you don’t live near a bakery doesn’t mean you have to go without cheesecake.–Hedy Lamarr

If there’s cheesecake in the house, I’ll have some.–Kelly Ripa

I suspect music is auditory cheesecake, an exquisite confection crafted to tickle the sensitive spots of … our mental faculties.–Steven Pinker

I might put a nicer pair of heels on and a cooler outfit, but I’m still that naughty girl who likes a slice of cheesecake on my day off.–Jessie J

The Cheesecake Factory is a great business model, but if you take your wife there for your 25th wedding anniversary, you might not reach your 26th.–Scott Adams

In the ’80s, I thought I’d be a success as a woman if I were the president of a billion dollar company, had a sensitive soul-mate husband, two bilingual children, buns of steels, and a compost heap. In the ’90s, I pretty much feel I’m a success if I can get through the afternoon without eating a cheesecake.–Cathy Guisewite

The cheesecake was smooth and lush, with the personality of a warm and well-to-do uncle…–Don DeLillo

Why do only the awful things become fads? I thought. Eye-rolling and Barbie and bread pudding. Why never chocolate cheesecake or thinking for yourself?–Connie Willis

Anyone can do running. Running should be easy. It should be fun. It should include everyone. It shouldn’t be a punishment for eating cheesecake…–Christopher McDougall

I can dream away a half-hour on the immortal flavor of those thick cheese cakes we used to have on a Saturday night.–Mary Antin

The only way cheese is dessert is when it’s followed by the word cake.–Michele Gorman

Find over 9500 inspirational quotes and a link to the Quote of the Day list, as well as quotation related merchandise, at http://www.quotelady.com. Also visit us on Facebook at https://www.facebook.com/pages/Quote-Lady/133258553807 and on Twitter: https://twitter.com/kloberst (@kloberst)