February 21 is National Sticky Bun Day. These sweet treats are made from regular yeast dough but are put into a pan with brown sugar and butter in the bottom. You can add other things like cinnamon or honey or orange zest or nuts of some kind, but only the first two are actually needed. Most of the information on the Web shows these made much like cinnamon rolls, with brown sugar and butter and cinnamon placed on rolled out dough, then formed into a log shape and cut off, putting the buns on top of the brown sugar and butter in the pan. I suppose that must be the official way, but that’s not the way my mother made them. She put the brown sugar and butter and walnuts in the bottom of the pan, but then she cut about two inch round balls from the main dough, and rolled them out and formed them into a pretzel shape to lay in the pan. They were wonderful. Though I do a lot of baking myself now, I have never been able to recreate my mother’s sticky buns. But oh, I can taste them now!

The actual origins of the first sticky bun are unknown, but it looks like it came to the United States with the German settlers to Pennsylvania. They were originally called schnecken. Even now Philadelphia is known as the place to find a sticky bun. Some folks say it is only another name for cinnamon roll, but they are wrong.

You can find many recipes on the Web if you would like to try your hand at these. Simply enter “sticky bun recipe” into your favorite browser, and there you are. 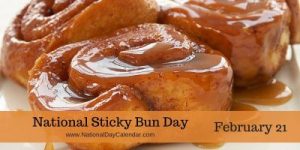 Needless to say, there aren’t really any quotes about sticky buns, so here are some about bread.

There is not a thing that is more positive than bread.–Fyodor Dostoevsky

Good bread is the most fundamentally satisfying of all foods; and good bread with fresh butter, the greatest of feasts.–James Beard

The smell of good bread baking, like the sound of lightly flowing water, is indescribable in its evocation of innocence and delight.–M.F.K. Fischer

Without bread all is misery.–William Cobbett

Avoid those who don’t like bread and children.–Swiss Proverb

With a piece of bread in your hand you’ll find paradise under a pine tree.–Russian Proverb

Rather a piece of bread with a happy heart than wealth with grief.–Egyptian Proverb

Better dry bread in peacetime than meat in wartime.–Hungarian Proverb

I judge a restaurant by the bread and by the coffee.–Burt Lancaster

Man does not live by bread alone, even presliced bread.–D. W. Brogan

Bread is a staple article of diet in theory, rather than in practice. There are few who are truly fond of bread in its simplest, most pure, and most healthful state….Is there one person in a thousand who would truly enjoy a meal of simple bread of two days old?–William Andrus Alcott

…is there anything in the world lovelier than fresh warm bread and a mug of sweet golden tea?–Frank McCourt

Find nearly 9500 inspirational quotes and a link to the Quote of the Day list, as well as quotation related merchandise, at http://www.quotelady.com. Also visit us on Facebook at https://www.facebook.com/pages/Quote-Lady/133258553807 and on Twitter: https://twitter.com/kloberst (@kloberst)

For November 17. When I was growing up, my mother made bread every week. It was nothing fancy, just plain white bread which she often put raisins in to give it more nutritional value. She used the same dough for everything, from loaves of bread to rolls to sticky buns (yum!) to pizza dough. One of the things my sisters and I still laugh about is Saturday night pizza with raisins in the crust.

I also often make my own bread, but it’s not likely to be plain white. I usually use wheat flour now, and use different recipes according to what I’m making, whether that’s a plain loaf of bread or rolls or one of my favorites, focaccia bread.

Although this holiday is always celebrated on the same date, no one seems to know how or when it came about. It is possible it was started by the Homemade Bread Day Committee of Montague, Michigan, and perhaps in the mid-1970s.

However, about bread itself, we know quite a bit. Quoting from one of my go-to sites, gone-ta-pott: “Bread is one of the oldest prepared foods, dating back to the Neolithic era. The first breads produced were probably cooked versions of a grain-paste, made from ground cereal grains and water, and may have been developed by accidental cooking or deliberate experimentation with water and grain flour. Descendants of these early breads are still commonly made from various grains worldwide, including the Iranian (Persian) lavashs, tabuns, sangaks, Mexican tortilla, Indian chapatis, rotis and naans, Scottish oatcake, North American jonnycake, Middle Eastern pita, and Ethiopian injera. The basic flat breads of this type also formed a staple in the diet of many early civilizations with the Sumerians eating a type of barley flat cake, and the 12th century BC Egyptians being able to purchase a flat bread called ta from stalls in the village streets. The development of leavened bread can probably also be traced to prehistoric times. Yeast spores occur everywhere, including the surface of cereal grains, so any dough left to rest will become naturally leavened. Although leavening is likely of prehistoric origin, the earliest archaeological evidence is from ancient Egypt. Scanning electron microscopy has detected yeast cells in some ancient Egyptian loaves.”

So celebrate a bit of human history, particularly women’s history, and made yourself some bread today!

How can a nation be great if its bread tastes like Kleenex?–Julia Child

The smell of good bread baking, like the sound of lightly flowing water, is indescribable in its evocation of innocence and delight.–M.F.K. Fisher

For less than the cost of a Big Mac, fries and a Coke, you can buy a loaf of fresh bread and some good cheese or roast beef, which you will enjoy much more.–Steve Albini

A loaf of bread, a jug of wine, and thou.–Omar Khayyam

There is not a thing that is more positive than bread.–Fyodor Dostoevsky

Good bread is the most fundamentally satisfying of all foods; and good bread with fresh butter, the greatest of feasts.–James Beard

With bread all sorrows are less.–Miguel de Cervantes

Without bread all is misery.–William Cobbett

Man does not live by bread alone, even presliced bread.–D. W. Brogan

I would say to housewives, be not daunted by one failure, nor by twenty. Resolve that you will have good bread, and never cease striving after this result till you have effected it.–in ’Housekeeping In Old Virginia’

Bread for myself is a material question. Bread for my neighbor is a spiritual one.–Nikoli Berdyaev

If you have two loaves of bread, sell one and buy a lily.–Chinese proverb

Rather a piece of bread with a happy heart than wealth with grief.–Egyptian Proverb

Better dry bread in peacetime than meat in wartime.–Hungarian Proverb

Find more than 9000 inspirational quotes and a link to the Quote of the Day list, as well as quotation related merchandise, at http://www.quotelady.com. Also visit us on Facebook at https://www.facebook.com/pages/Quote-Lady/133258553807 and on Twitter: https://twitter.com/kloberst (@kloberst)