September 5 we celebrate a purist’s pizza, with only cheese as the topping. Though pizzas may be topped with practically anything – pepperoni, sausage, anchovies, vegetables, or even pineapple – this day is for the one, the only, the original.

People have been eating cheese on flatbread at least back to Greek and Roman times, where the food was called pita in Greek. However, true pizza originated in Naples. Italy. Originally, pizza was considered to be a poor person’s food, as it contained only simple, inexpensive ingredients – flour, water, and yeast, topped with cheese and tomatoes. But that changed in the 1880s when, according to legend, baker Raffaele Esposito, for the visit of King Umberto I and Queen Margherita of Savoy, baked a pizza that consisted of green (basil leaves), white (mozzarella), and red (tomatoes), which evoked the colors of the Italian flag. According to the tale, this combination was named Pizza Margherita in her honor. Today there are only two pizzas recognized by those who set the standards for such things in Naples – this one, and the marinara, which consists of tomato sauce, mozzarella cheese, and fresh basil.

Pizza arrived in the United States with immigrants from Italy. They settled mainly in New York, New Jersey, and Chicago. Up until the 1940s, most pizza was made and consumed there. But in World War II, soldiers found pizza during the occupation of Italy and brought it home with them. It didn’t take long for pizza to catch on in the mainstream.

Some facts about pizza:

Many pizza chains will have deals today, so do check them out and enjoy! 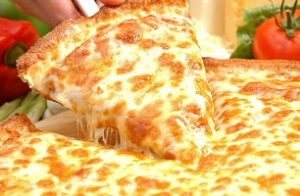 My weakness is pizza, any form of carbohydrate. I like junk carbohydrates, I like cheap greasy cheeseburgers, quality french fries.–Mary Tyler Moore

You better cut the pizza in four pieces because I’m not hungry enough to eat six.–Yogi Berra

Pizza makes me think that anything is possible.–Henry Rollins

Without question, the greatest invention in the history of mankind is beer. Oh, I grant you that the wheel was also a fine invention, but the wheel does not go nearly as well with pizza.–Dave Barry

Home in bed listening to the rain getting ready to order a pizza. Sounds like a song til the last part.–Gabriel Iglesias

I just want to be in my sweats, walk my dog, watch TV and eat pizza.–America Ferrera

I’m a huge pasta and pizza lover. I can eat those every single day.–Shay Mitchell

If you can’t feed a team with two pizzas, it’s too large.–Jeff Bezos

I will never understand the appeal of the Hawaiian pizza.–Judd Winick

Venus is 900 degrees. I could tell you it melts lead. But that’s not as fun as saying, ‘You can cook a pizza on the windowsill in nine seconds.’ And next time my fans eat pizza, they’re thinking of Venus!–Neil deGrasse Tyson

Pre-heat the oven? Really? If I was the sort of person who planned ahead, I wouldn’t be eating this Totino’s Party Pizza in the first place.–Adam Peterson

If properly dried and trimmed, New York-style pizza could be used to make a box for Chicago-style pizza.–Nick Offerman

October is National Pizza Month, and theoretically, at least, you should be able to find some exceptional deals at your local pizza shop during this month. According to what I’ve read, October is also the month when pizzerias try out new flavors. So it might be worth checking out. By the way, it is said that pizza comes from the Latin root word picea which means the blackening of crust by fire. Not sure if that is actually true.

According to pizza.com (which is definitely the go-to place for information about pizza), October was designated pizza month in 1984 by Gerry Durnell, the founder of Pizza Today magazine when he realized there were no periodicals or tradeshow publications to support his growing pizza business or the industry in general. And it worked well. Today it is estimated that there are over 63,000 pizzerias in the United States.

I live in a mobile home court, and we go out together for pizza once a month. Besides the fellowship, the best part is that if you buy 12 pizzas from Mia & Pia’s where we go, you get a free pizza. Yum! So far I have gotten two free pizzas, so you can guess how much I love it! And it’s always pepperoni for me. I’m a purist when it comes to pizza. But alas, as much as I love the Pacific Northwest, to get a really good pizza, you need to be in the east. Any of you lucky enough to be near a Pontillos in New York state, enjoy a pizza for me.

Here are a few fun facts from pizza.com:

On Venus you could cook a 16-inch pepperoni pizza in seven seconds, just by holding it out to the air. (Yes, I did the math.)–Neil deGrasse Tyson

Heaven would be a comfortable chair, a library, Diet Coke, and an occasional cheese pizza.–Jayden Hunter

I will never understand the appeal of the Hawaiian pizza.–Judd Winick

I just want to be in my sweats, walk my dog, watch TV and eat pizza.–America Ferrera

We’ve got a wood-burning pizza oven in the garden – a luxury, I know, but it’s one of the best investments I’ve ever made.–Gwyneth Paltrow

My car broke down outside pizza Hut last night. So I ordered a pizza to be delivered to my house and got a lift from the driver.–Nikhil Saluja

Find more than 9000 inspirational quotes and a link to the Quote of the Day list, as well as quotation related merchandise, at http://www.quotelady.com

Today, April 5 is National Deep Dish Pizza Day. Deep dish pizza is sometimes also called Chicago style pizza, as it seems to have originated in that city. Here’s what Wikipedia says about it: “Deep-dish pizza is baked in a round, steel pan that is more similar to a cake or pie pan than a typical pizza pan. The pan is oiled in order to allow for easy removal as well as to create a fried effect on the outside of the crust. In addition to ordinary wheat flour, the pizza dough may contain corn meal semolina, or food coloring, giving the crust a distinctly yellowish tone. The dough is pressed up onto the sides of the pan, forming a bowl for a very thick layer of toppings.”

Personally, I have never had a deep dish pizza, but I do love regular pizza, especially thin crust. Being a transplanted easterner now living on the west coast, I am fussy about my pizza. It can be very difficult to find really good pizza in the Pacific Northwest. I think it has to do with the sauce, which is somehow never as good out here. I am also a very traditional pizza eater, preferring pepperoni to anything else. In fact, one of the ways you can tell someone born in the Pacific Northwest is that they eat Hawaiian Pizza, which is topped with Canadian bacon and pineapple. (If you could see me, I am currently making the sign to ward off evil.)  🙂

Perhaps you never thought there might be quotes about pizza, but here are a few.

I’m an emotional eater. If something’s worth celebrating, we’re going to grab pizza. If it’s going bad, girl, pass me the chocolate. Gotta keep it in check!–Laurieann Gibson

Pizza makes me think that anything is possible.–Henry Rollins

Ideas are like pizza dough, made to be tossed around.–Anna Quindlen

Find nearly 9000 inspirational quotes and a link to the Quote of the Day list at http://www.quotelady.com.