You might not think straw hats need an entire month to celebrate them, but it’s true. April is Straw Hat Month. We often think of straw hats as belonging to folks who work outside, from cowboys, to farmers to workers in rice paddies, though those aren’t the only places to find them. They are popular for such, however, being relatively cool because they are woven, yet they provide good protection from the sun. You may also see them in movies or TV shows of British government officials in some of their former colonies in warmer climates, or in the form of Mexican Sombreros. Some of those can be very colorfully decorated.

Straw hats have been around a long time. Click here for an example of field workers in straw hats from the Maciejowski Bible manuscript from 1250. That is just the oldest link on this delightful page organized for the Society for Creative Anachronism, for suggested straw hats for costumes for role-playing. One of my favorites this French peasant woman, from 1577. What a great hat!

Because straw hats appear in many cultures in the world, they have been made of many different kinds of materials. According to Days of the Year, “Some of the most common are wheat straw hats, most commonly found in the Italian Peninsula, rush straws, palm leaves … and of course rice straw and bamboo that are used in Asian Conical hats.”

April may strike you as an unlikely month for straw hats, because at least in my area of the country, it is not warm enough yet to wear them, but it is windy enough to blow that hat off your head. But this gives you time to find the perfect hat to wear for summer.

The graphic I have chosen is Sylvester McCoy in his trademark straw panama hat from Doctor Who. 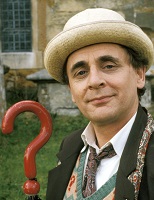 At Dresden on the Elbe, that handsome city,
Where straw hats, verses, and cigars are made,
They’ve built (it well may make us feel afraid,)
A music club and music warehouse pretty.
Heinrich Heine

Always buy your straw hats in the Winter–Benjamin Graham

Australian schools have cool uniforms. I wish I had to wear a woven straw hat for maths.–Harry Styles

You know, for most of its life bluegrass has had this stigma of being all straw hats and hay bales and not necessarily the most sophisticated form of music. Yet you can’t help responding to its honesty. It’s music that finds its way deep into your soul because it’s strings vibrating against wood and nothing else.–Alison Krauss

The best way to garden is to put on a wide-brimmed straw hat and some old clothes. And with a hoe in one hand and a cold drink in the other, tell somebody else where to dig.–Texas Bix Bender

I turned on the pillow with a little moan, and at this juncture Jeeves entered with the vital oolong. I clutched at it like a drowning man at a straw hat.–P. G. Wodehouse

Hope is a straw hat hanging beside a window covered with frost.–Margaret George

The straw hat is the typical hat Cubans use. It’s cool and keeps the sun away from your face.–Desi Arnaz

The Italians always made good wine, but you had the impression they were friendly guys in straw hats running family vineyards with slaves or something so that the vino was never more than ten bucks a bottle.–Joe Bob Briggs

Find over 9500 inspirational quotes and a link to the Quote of the Day list, as well as quotation related merchandise, at http://www.quotelady.com. Also visit us on Facebook at https://www.facebook.com/pages/Quote-Lady/133258553807 and on Twitter: https://twitter.com/kloberst (@kloberst)t

One thought on “Straw Hat Month”