Howard Phillips Lovecraft was born August 20, 1890, in Providence, Rhode Island, an only child. A sickly child, he was often too ill to go to school and was mainly self-taught. When he was 18, Lovecraft had a nervous breakdown, and never finished high school.

Along with Edgar Allen Poe, Lovecraft was a father of the modern horror story. His stories have a bleak view of life, perhaps influenced by the fact that he was prey to night terrors. They are some of the first stories to be about aliens, who generally did not wish mankind well. He also wrote of people who meddled in things best left alone, with terrible consequences.

Lovecraft was not a great writer. He published mainly in pulp magazines and had little success during his lifetime. So why am I promoting him in this blog? First, because there is something in his stories that can draw in the reader. His most mature work At the Mountains of Madness is a gripping tales of an expedition in Antarctica, which finds the remains of a non-human city buried for thousands of years, and what happens to those who dig too deeply. And his Cthulhu/the great old ones mythology is extensive and fascinating. Though as with Burroughs, a near contemporary, you have to overlook his racism, I like is that he never glorifies s evil, but always treats is as banal and degenerate.

However, his real contribution is not his stories themselves, but the influence he had on other writers, as diverse as Stephen King and Neil Gaiman, who wrote “A Study in Emerald,” that references Lovecraftian mythology. His influence on visual media is even greater, with The Thing from Another World, and Alien, probably being the most obvious, but from Batman to Doctor Who to role playing games, his inspiration is always there. 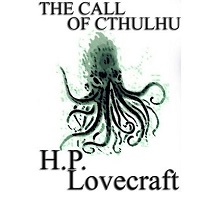 As for the Republicans – how can one regard seriously a frightened, greedy, nostalgic huddle of tradesmen and lucky idlers who shut their eyes to history and science, [and] steel their emotions against decent human sympathy.

I felt myself on the edge of the world; peering over the rim into a fathomless chaos of eternal night.

The ignorant and the deluded are, I think, in a strange way to be envied. That which is not known of does not trouble us, while an imagined but insubstantial peril does not harm us. To know the truths behind reality is a far greater burden.

That is not dead which can eternal lie,
And with strange aeons even death may die.

No new horror can be more terrible than the daily torture of the commonplace.

If religion were true, its followers would not try to bludgeon their young into an artificial conformity; but would merely insist on their unbending quest for truth, irrespective of artificial backgrounds or practical consequences.

I never ask a man what his business is, for it never interests me. What I ask him about are his thoughts and dreams.

The world is indeed comic, but the joke is on mankind.

For I have always been a seeker, a dreamer, and a ponderer on seeking and dreaming…

The greatest human achievements have never been for profit.

Ocean is more ancient than the mountains, and freighted with the memories and the dreams of Time.

I could not write about “ordinary people” because I am not in the least interested in them.

Pleasure to me is wonder – the unexplored, the unexpected, the thing that is hidden and the changeless thing that lurks behind superficial mutability. To trace the remote in the immediate; the eternal in the ephemeral; the past in the present; the infinite in the finite; these are to me the springs of delight and beauty.