On January 17 we celebrate and encourage the creativity of children. The date chosen to celebrate this day is the anniversary of Benjamin Franklin’s birthday. When Franklin was just 12 years old, he invented the world’s first swim flippers, though they were for the hands rather than the feet.

Young people created some important things. (Thanks to Warwick Daily News for these.)

The most creative people on the planet are children. Today is the day to encourage their dreams and crazy ideas, their inventiveness and creativity. 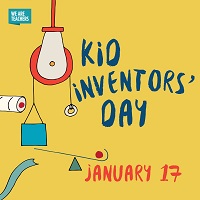 Focus should be to encourage and develop creativity in all children without the ultimate goal begin to make all children inventors, but rather to develop a future generation of critical thinkers.–Faraq Mousa

The only truly happy people are children and the creative minority.–Jean Caldwell

There is no doubt that creativity is the most important human resource of all. Without creativity, there would be no progress, and we would be forever repeating the same patterns.–Edward de Bono

We are born makers. We move what we’re learning from our heads to our hearts through our hands.–Brene Brown

When I’m playful I use the meridians of longitude and parallels of latitude for a seine, and drag the Atlantic Ocean for whales. I scratch my head with the lightning and purr myself to sleep with the thunder.–Mark Twain

You can’t use up creativity. The more you use, the more you have.–Maya Angelou

The creation of something new is not accomplished by the intellect but by the play instinct acting from inner necessity. The creative mind plays with the objects it loves.–Carl Jung

Imagination is the beginning of creation. You imagine what you desire, you will what you imagine and at last you create what you will.–George Bernard Shaw

Creativity comes with being human; it is the power to think new, to imagine, to see a metaphor. Animals make by instinct. People get new ideas. All you need is an open mind.–Jean Unsworth

Curiosity about life in all of its aspects, I think, is still the secret of great creative people.-–Leo Burnett

Don’t let anyone rob you of your imagination, your creativity, or your curiosity. It’s your place in the world; it’s your life. Go on and do all you can with it, and make it the life you want to live.–Mae Jemison

Imagination is the spark that ignites the fire of creativity.–Richard Laurence Peterson